Darksiders is an original Action/Adventure game that plunges players into a near future world devastated by the apocalypse. 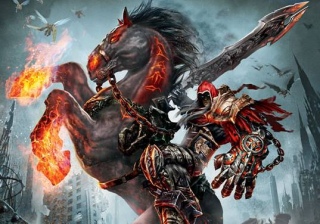 The first model to be released from this partnership will be a 14” statue of WAR, the lead character of the game and the first Horseman of the Apocalypse, atop his fiery mount, Ruin. SOTA will be featuring a prototype of this statue at Comic Con and will begin taking pre-orders starting July 22 on the SOTA website. The statue will be available to own later this year.

Josh Austin, Director of Licensing and Merchandising at THQ Inc. commented, “We chose to work with SOTA Toys on this product range because of their reputation for quality. We are pleased to give Darksiders fans the ability to further engage with their favorite characters through a range of high-end statues.”

Darksiders is an original Action/Adventure game that plunges players into a near future world devastated by the apocalypse. Deceived by the forces of evil into prematurely bringing about the end of mankind, WAR – the first Horseman of the Apocalypse – must return to Earth to search for the truth and punish those responsible. War must take on the forces of Heaven and Hell, forge uneasy alliances with the very demons he hunts, and journey across the ravaged remains of the Earth on his quest for vengeance. Players harness the apocalyptic power of War, combining brutal attacks and supernatural abilities to decimate enemies who stand in his way. With an extreme arsenal of weapons, War blazes a trail of destruction, and emerges even more deadly atop Ruin, War’s fiery phantom steed. Darksiders is now available for Xbox® 360 and PlayStation® 3. For more information, please visit www.darksiders.com.

SOTA Toys is a prototyping, manufacturing and development house that specializes in high-end collectible art pieces and articulated action figures. SOTA Toys is proud to participate in this partnership and looks forward to working with THQ to bring the fans the high-quality Art Pieces that they want and deserve.