From new Star Wars to The Walking Dead, Gentle Giant had a great booth at this year’s Star Wars Celebration 6.

Gentle Giant was in full effect at this year’s Star Wars Celebration. Along with having a couple of pretty sweet exclusives (A 12 Inch Kenner Lando Calrissian and a Clone Trooper Statue), they had a great booth set up with amazing pieces from their Star Wars line as well as several other licenses.

The big news on the Star Wars front is the Holiday piece. We had pics of the Holiday Jar Jar on the site last week, but this is the first time that we’ve been given a chance to see it in person. Do I love it? It’s Jar Jar, so I don’t think that is possible. Still, even if he is my least favorite character, I give them credit for giving him one hell of a sculpt. I spoke to the guys at Gentle Giant on how Jar Jar Binks ended up as the Holiday Exclusive. The answer is simple, the fans demanded it. That brings me to this question… Hey Fans, what the hell is wrong with you? How about suggesting something like Jabba being given a han solo in Carbonite with a bow on it. How about anything other than Jar Jar?!?!? 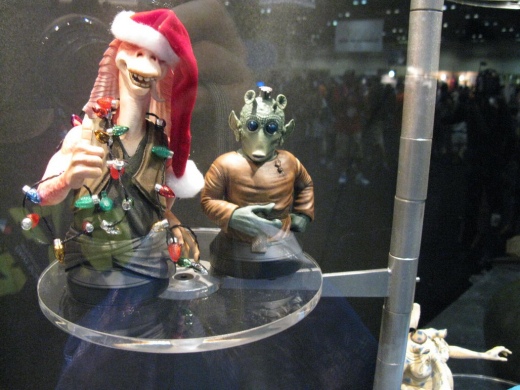 Along with the great Star Wars stuff, we also got a look at the upcoming Rick and Well zombie busts for The Walking Dead, some new busts from Harry Potter and the Hobbit, and a great look at what is coming up for Gentle Giant’s Marvel license. It is nice to see Deadpool getting so much love. 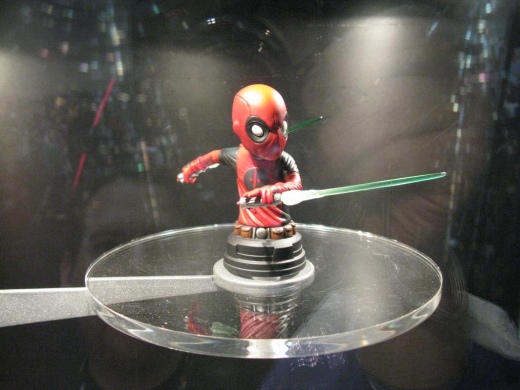