As many people already know, Super 7 has an Alien line coming out. I had a chance to look at a couple of the figures and get the scoop directly from the source.

It is always a good time when you stop by the Super 7 Booth, no matter what convention you are attending. Not only do they have the awesome giant Stormtrooper figure (Sold out) and the upcoming giant Boba Fett (The head sculpt looks sick), but they’ve also always got a few more things up their sleeves.

Super 7 is mainly known for their Kaiju figures. That’s a word that you are going to hear a lot more when Pacific Rim comes out. They have some other great stuff going on as well. We didn’t get to talk about it, but there are some great teasers in the images below of a full line of Super 7 Transformers figures that are on the way. That means Super awesome Japanese style vinyl Transformers! I’m stoked for that.

That wasn’t even the coolest thing at the booth this year though. As many people already know, Super 7 has an Alien line coming out. I had a chance to look at a couple of the figures and get the scoop directly from the source. The upcoming Alien figures aren’t exactly new, but they have never made it to market. Back when Alien first came out, Kenner designed an entire line of figures. Sadly, the line never got made and the prototypes were scattered to the four corners. Super 7 has tracked them down and gotten the license to make the figures that almost were, one of the hottest collectible lines for next year. To add to the vibe of the retro line, Super 7 has also designed a set of vintage “Burger King” style glasses, as if BK had created them themselves when the film came out. 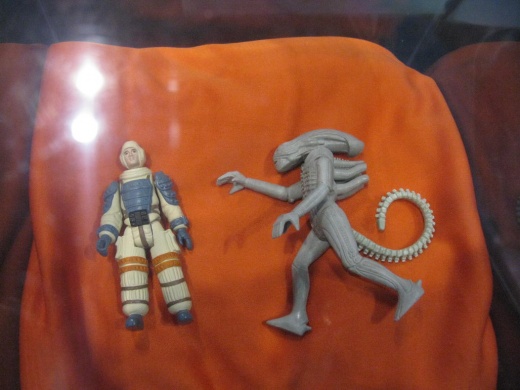