UFC Deluxe Figures feature 29 points of articulation to recreate the most realistic and dramatic MMA moves. 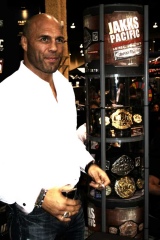 UFC Deluxe Figures feature 29 points of articulation to recreate the most realistic and dramatic MMA moves. JAKKS expects to ship new waves every other month, each featuring at least eight different fighters, as well as exclusive figures and assortments available at different mass retailers nationwide – Collect them all! Ages 8+, Suggested Retail Price $9.99

The Octagon is where all the action happens! JAKKS’ 14.5” UFC Octagon playset features hinged “play-doors” for easy access and is the perfect place for kids to battle and recreate their favorite MMA moments. Ages 8+, Suggested Retail Price $19.99

Play like a true champion with your very own collection of UFC Championship Belts. These authentic, wearable replica belts for UFC, Pride, and WEC are the only ones on the market that fit adults and kids. Show your UFC spirit by creating your own wall of champions like the real fighters do! Ages 8+, Suggested Retail Price $11.99