Here are slides from Hasbro’s G.I. Joe Toy Fair 2011 collector’s panel. First up, to celebrate the 30th anniversary of Indian Jones, Hasbro is set to release a set of Indian Jones figures from Raiders of the Lost Ark.

Fans can also expect the mother of all SDCC exclusives, StarScream SkyStriker! It is a Skystriker repainted as a G1 Starscream. It will come with a Cobra Commander with a G1 Megatron gun! 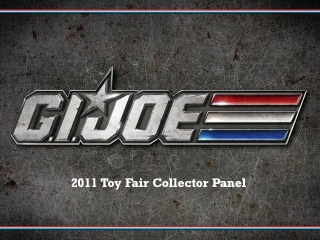