Gamers and Monster fans have been waiting for a game like Monsterpocalypse.

One of the fondest memories I had during childhood was watching a late night monster movie on a Friday or Saturday. I had to research TV listings in a newspaper, and hoped and prayed that a Godzilla or Gamera movie was playing either on “Creature Features” on TBS, “Monstervision” on TNT, or in my case “Crematia Mortem” on my local Kansas City station; KSHB Channel 41.

That’s right; this was before weekly (and extremely lame) Power Ranger shows that aired on Fox Kids. We didn’t care if they looked like guys in costumes. We wanted to see two monsters beat the piss out of each other. Privateer Press’ Monsterpocalypse tries to recapture the rubber suited action set pieces from yesterday.

It’s obvious that Privateer Press did extensive research before creating this game. Each player takes control of titan from one of the six factions. Although each is an original monster, it’s not too hard to see where the influences come from. The Lords of Cthul have a strong HP Lovecraft flavor, the Terrasaurs represent the traditional Godzilla monster, the Shadow Sun Syndicate resemble the Ultra Man franchise, and I can’t help but notice the members of GUARD as a combination of Shogun Warriors and Tranzor Z. Privateer Press wanted to make sure there was something for all the monster fans out there. Each monster has two forms; the standard Alpha form and the hyper form. Hyper forms are essentially the same figure, but transparent, and in one color. This form represents an increase in power, and improved game effects from the standard Alpha form. It can only be achieved at certain times during the game. It’s like when King Kong was zapped with lighting, and gained cattle prod hands to take on Godzilla. 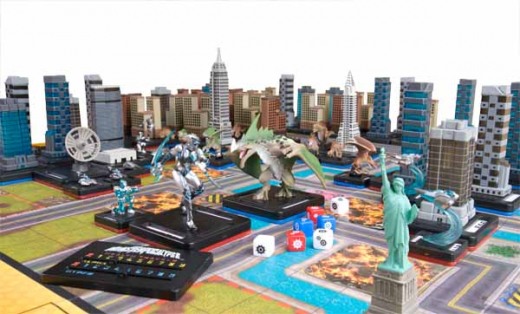 The creatures square off in a play mat where you can place buildings and other structures. They act as protection, obstacles and potential weapons. Lastly, players control small army of “Units” which represent the military defense force, alien fighters, or minion creatures. They’re the annoying mosquitos that get in the way of the monster in hopes to weaken them so the heavy artillery can take it out. Everything is detailed, and painted to perfection. They look like guys in suits, and not the digital mess you see in Michael Bay’s Transformers movies. 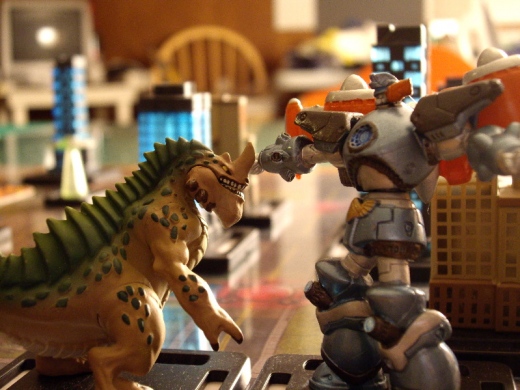 Like the old films of yesterday, the goal is straightforward; beat the living tar out of the enemy until they can’t move anymore. To do this, you have two pools where you place the three specific colored dice that are needed to play; Action, Boost and Power. One bank is for your units, and the other one is for the monster. The dice have two different functions; they can be used as currency on what kind of actions your faction can perform, and they determine how much damage you deal to an enemy. Once you use all of the dice in one pot it usually makes its way to the other one. This regulates how much the monster, or units can do in a single turn. A player doesn’t want to exhaust their monster too much, and units shouldn’t only be used as cannon fodder. If you want to outwit the other player, you need to balance your attack force.

The game suffers from the standard pitfalls of most miniature gaming rules. There are just way too many little rules you need to remember. In the game, there are symbols that represent the monsters traits. It can be particularly daunting in remembering which symbol does what. The game offers up a quick reference card, but players will undoubtedly be flipping back and forth in the rule book to see if they’re playing the game right. Veteran miniature gamers will probably find no difficulty in remembering them, but players new to the genre will probably need a couple of more sessions to truly understand the gameplay. The rule book tries to help you out by dividing the basic game with the advanced rules, but keep some bookmarks handy.

If you want to get into this game get ready to shell out major cash. The starter box retails at $39.99. This will provide a player everything they need to play, but a person looking to improve his chances to win will need to invest in some booster packs. The marketing of these products follows the collectable card game model. You won’t know what each box contains. There are also separate boosters for units/structures and monsters (with their corresponding hyper form). It’s a pretty expensive hobby, but don’t forget you’re paying for quality craftsmanship.

Gamers and Monster fans have been waiting for a game like Monsterpocalypse. Today Netflix and Digital Cable have granted us the ability to watch giant monster movies anytime we want. Privateer Press has given us the unique ability to experience the sheer carnage of a monster melee. The rules have a high learning curve, and it will be a damper on your wallet, but this is still a treat for that child who loved watching late night monster movies.