They call it the Rage exclusive and it is no wonder. This statue bleeds rage. 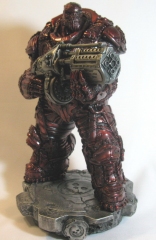 This is the second of three reviews that we’ve got planned for the three exclusive Gears of War Statues that Mindzeye Studios is creating for Comic Con. As you’ve seen in our recent article about Mindzeye, they are a younger company, but their work packs a tremendous punch. In very short order they’ve not only launched their own statue and comic book line, but they’ve pulled in major licenses like Hellboy and Gears of War. To celebrate Comic Con this year they’ve created not one exclusive statue, but three amazing metallic variants of their brilliant sculpts for Santiago, Boomer and Fenix.

Last time we looked at the blue awesomeness of Dom Santiago so this time I thought we’d switch up the color wheel a bit and look at the hulking redness of Boomer. OK, I’ll admit it, I’ve never played Gears of War before. In fact, I can’t play first person shooters at all because they make me dizzy. Ya, I’m a punk… you should see how green I get on a movie ride. Anyways. I’m not real familiar with the characters, but Boomer appears to be one severe bad ass. Not only does the boomer statue tower over the other statues in the set at 11.5″, but he weighs in at a whopping 11.25 lbs compared to the other statues that weigh in just over 3 lbs.

Ok, so you know he’s big, but size isn’t everything, right?… Right? Without a great paint job and sculpt, it would just be a really heavy paperweight. Trust me, with the job Mindzeye studios did on Boomer, he’s anything but a paperweight. The red paint job on Boomer contrasts brilliantly with the other two statues in the set. They call it the Rage exclusive and it is no wonder. This statue bleeds rage.

Along from the beautiful metallic red finish, this statue has some pretty impressive sculpting to go along with it. When you take a look at the gallery, make sure to spend a decent amount of time looking at his face. There’s a lot of detail going on there. He looks like an ultimate warrior… no not that one, the kind that doesn’t wear fringe. The battle damage on his collar and all over his suit shows the toughness of the character and it adds a lot to the visual appeal of the sculpt. Granted, the big freakin gun doesn’t hurt either. Just like Santiago, the costume is replete with buckles, straps and weapons of all kinds that will have you staring at this bad boy for a long time… that is if you can get your hands on him. This SDCC exclusive is limited to just 100 pieces. If you want one, you better get over to the Mindzeye homepage right now.