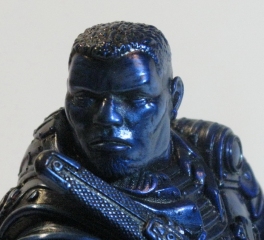 This is the first of three reviews that we’ve got planned for the three exclusive Gears of War Statues that Mindzeye Studios is creating for Comic Con. As you’ve seen in our recent article about Mindzeye, they are a younger company, but their work packs a tremendous punch. In very short order they’ve not only launched their own statue and comic book line, but they’ve pulled in major licenses like Hellboy and Gears of War. To celebrate Comic Con this year they’ve created not one exclusive statue, but three amazing metallic variants of their brilliant sculpts for Santiago, Boomer and Fenix.

I want to start out by taking a look at Dom Santiago. In the three statues available, there are two blue metallic statues and one red. Dom is one of the blue ones, but he’s no measly little smurf. Dom is 9 inches of cold cast bronze bad ass who captures all the intensity of his role in Gears of War without you ever having to touch your controller.

Its always a little tougher to review a statue because we aren’t looking at things like articulation that are so easy to pick apart. All we really have to look at are paint, sculpt and overall quality. The funny thing about this statue is that when it comes to paint, there’s not much to say. The statue has two colors, Blue and Platinum. That is not to say that it looks plain. The metallic finish on this Comic Con Exclusive will make you drool. the dark accents add a depth to the sculpt that makes all the amazing detail pop just as if it was in technicolor.

Speaking of the sculpt, holy crap. I’ll admit, of the three statues in the set, this is my least favorite of the three, but that just means that the others are even more awesome. I was not expecting this level of detail on the statue. You find yourself looking at it for a minute, then going back and looking at it more because you keep noticing more details. the intricate detail on the gun is very impressive and then when you start exploring Dom’s outfit and see all the knives, buckles and other goodies, you can’t help but get excited for what else this company has up their sleeves.

It’s a great statue. Considering the edition size is only 100 pcs, you’d be an idiot not to try and snag one while you can. Also, check out the other two upcoming reviews from the set and you’ll be clamoring for them all.