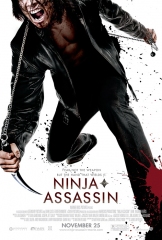 I’ve never taken myself to see a movie. Ever. Just in case you didn’t catch that first two times around (3rd time’s a charm, or so I hear), I’ve always had a date whenever I went to the movies. I’ve never made an exception, even for Ryan Reynolds or Daniel Henney. Then again, they’ve never made a movie that I couldn’t talk someone into going with me. Therefore, that doesn’t count.

And then came Ninja Assassin.

Let me clarify something. This isn’t a movie that no one wanted to watch with me. All my friends are watching it Friday night. I decided I couldn’t wait so I did the unthinkable. I broke my 30 year streak of never seeing a movie solo because that’s how bad I wanted to see this movie.

Allow me to say that I wasn’t disappointed. You won’t be either if, like me, you’re going to watch it for the following reasons :

1. You love ninjas / secretly wish you were a Ninja.Fu master
2. You wish you could’ve played with these same exact weapons when you were little
3. You love crazy fight scenes with said ninjas swinging around bad ass weapons
4. You’re not afraid of blood

A brief summary of the movie for those who either aren’t familiar with it, don’t have access to a TV or computer with functional Internet.

Fear not the weapon but the hand that wields it.

Ninja Assassin follows Raizo (Rain), one of the deadliest assassins in the world. Taken from the streets as a child, he was transformed into a trained killer by the Ozunu Clan, a secret society whose very existence is considered a myth. But haunted by the merciless execution of his friend by the Clan, Raizo breaks free from them and vanishes. Now he waits, preparing to exact his revenge.

In Berlin, Europol agent Mika Coretti (Naomie Harris) has stumbled upon a money trail linking several political murders to an underground network of untraceable assassins from the Far East. Defying the orders of her superior, Ryan Maslow (Ben Miles), Mika digs into top secret agency files to learn the truth behind the murders. Her investigation makes her a target, and the Ozunu Clan sends a team of killers, led by the lethal Takeshi (Rick Yune), to silence her forever. Raizo saves Mika from her attackers, but he knows that the Clan will not rest until they are both eliminated. Now, entangled in a deadly game of cat and mouse through the streets of Europe, Raizo and Mika must trust one another if they hope to survive and finally bring down the elusive Ozunu Clan.

So that’s the story in a nutshell. Now here’s what I thought about it. Fellas, take some notes if you want to convince a female to see this with you. 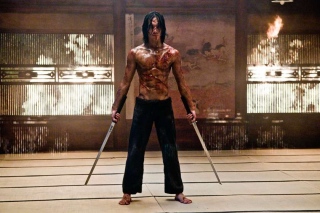 In case none of you are a lover of Asian pop music, let me tell you that one of my favorite songs in the world is “Love Story” by South Korean heart throb Rain…you know…the guy that plays Raizo.

What sets this movie apart from other let’s-see-how-high-we-can-get-the-body-count movie attempting a background love story is that this one actually pulls it off. I’m a girl. I know a passably believable love story when I smell one in what’s supposed to be guy movie.

What Kiriko and Raizo shared was pure. They met as questionably orphaned children learning to kick some ass in a remote fortified ninja stronghold. When he was injured, she applied salve to help alleviate his pain. She taught him how to keep in touch with his humanity when all he was taught was how to be the perfect assassin.

All the laws of the Nine Clans pointed to treasuring strength and abolishing weakness at all costs. This is shown perfectly by the art of cultivating the bonsai tree, one of the things the children are taught within those walls. Kiriko mutinously and methodically cuts the wires unnaturally bending the limbs of the miniature trees. When Raizo points out that she is going against the laws of the clan, she informs him that the heart of the tree knows how it’s supposed to grow.

The love they share is an innocent one but a powerful one. He gives her sips of water blown from his end of the straw into her lips when she is imprisoned.

During the time when he was blindfolded to develop his other senses, he not only sought out her heartbeat in a room full of other students but synchronized his to match hers.

She gives him but one chaste kiss throughout the entire movie.

Her murder was the catalyst for him to be all renegade ninja assassin vowing revenge for her death.

Tell me that isn’t love. Omg, I just got major chills thinking about that.

That alone should be enough to convince most women to watch this movie with you. Hell, I totally would…but then again, I’m going for other reasons. 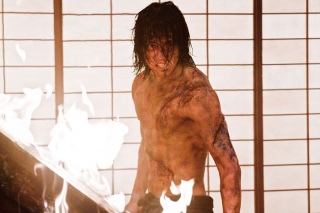 I am sad to say that my beloved Sung Kang didn’t last beyond the first 20 minutes of the movie. I was rather sad despite not liking his character. I couldn’t figure out if he was an Asian gangster from East LA or if he was just hurting from the tattoo session because he didn’t sound like any other Asian gangster I know. Trust me. My knowledge of the Asian gangster is extensive because I grew up watching a ton of Asian gangster dramas and films.

I’m happy to report that this sadness was only a brief shadow flitting by because then along came Rain in all his glory. I’m going to be honest and say that I didn’t care for him much before. Granted, I like some of his songs and I love “Love Story” like you wouldn’t believe but I was never into him as an actor. I love cars like any other rabid, stick shift driving girl but I couldn’t bring myself to watch “Speed Racer”. Sorry. Actually, I’m not sorry because I thought that movie was too sorry to waste my time on.

His performance as Raizo has caught my attention and not just because the man is rocking a body to drool and die for. He is totally believable as a modern day ninja and he nails his fight scenes with grace. I can see why he was tapped for this role after watching the fight scene from “Speed Racer” on YouTube. He’s got the whole brooding lone wolf thing down but he socializes well with others, like Mika. Their on screen chemistry didn’t really have me believing in it at first but it sort of got better at the end. Then again, I didn’t expect to see a love story between Raizo and Mika unfold before my very eyes when I skipped into the theater.

Oh, yes. One more thing I almost forgot to mention. He’s got his shirt off for most of the movie because somehow it makes epic sense to battle legions of fully clad evil ninjas when you are in only a pair of pants. This is the same reasoning utilized when Storm Shadow battles Snake Eyes in the G.I. Joe movie.

Hey, I’m not going to argue with that logic. It works for me and definitely fulfilled my recommended daily allowance of Man Candy for rest of the year. Screw visions of sugar plums dancing around my head this holiday season.

Rain with shuriken, Rain with Kusarigama, Rain with Katana, Rain singing “Love Song” to me….you get the picture.

While watching Rain run around half nekkid is fantastically awesome, I’m going to have to be honest and say what I most enjoyed about this movie were all the fight scenes. To see him kick major baddie ninja ass in this movie makes me wonder if he wasn’t doing precisely this his whole life. The action scenes flowed really well, the body count is higher than I can count (and I can count like nobody’s business) and blood is splattered by the gallons. 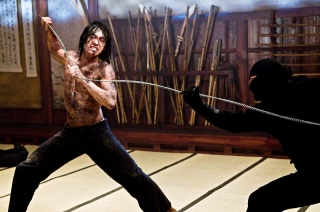 They’ve figured out some crazy ways to dismember, decapitate and disembowel so the fellas watching this won’t be disappointed.

Whoever the martial arts guy / weapons master was for this movie did a fantastic job. The fight scenes were amazing and I especially loved the Kusarigama. In case you don’t know what this is, it’s a Japanese weapon dating back to the feudal days when ordinary citizens weren’t allowed to have weapons. It’s a sickle shaped blade at one end connected by a chain to a very heavy weight on the other. It’s pretty obvious it’s a weapon so I’m not exactly sure why they made it when you can’t carry it out in the open…but whatever, I still love it. I don’t know why it reminds of me of Soul Calibur’s Ivy and her snake sword. Maybe because that wicked weapon was pretty awesome too.

It takes great skill to wield this particular piece but Rain does it not only with style but flair. I really wished I could’ve been the Kusarigama he was swinging around. You can tell Raizo loved his weapons by the great care with which he stores them and looks after them. God, I want to be that Kusarigama.

1. I couldn’t figure out if Mika’s boss was an idiot who’s never fast enough on the uptake or if he was just inept at….well….everything. I was rather surprised that he’s the only one who managed to evade and avoid all the bullets, shuriken and swinging katanas without sustaining a single scratch. God truly loves the idiots.

2. Who was giving Raizo all his information? Things that make you go hm….

3. Why was Takeshi always the one who found the ninjas-in-training when they were trying to escape?

4. Why were the ones trying to run away always female, dammit?!

5. What happened to the second female runaway ninja student? I don’t think she was killed because Raizo then went all ballistic an Kusarigama’d his father’s head.

6. I love how the secret of the Ozunu clan is crazy healing of the Wolverine variety. I can see how that could come in handy when you’re a ninja assassin.

There’s all manner of things that lurk in the dark, such as the Boogeyman and various monsters who live under the bed. But you know what? I’ll take my chances with them any day over a ninja concealed in the shadows with a sealed envelope of black sand.