Sex sells. I know that, you know that, the whole world knows that. Maggie Q is a gorgeous girl worthy of filling the legendary sexy stilettoes of Nikita.

The first thing I did this year at Comic Con was….*drum roll, please*….pay $5 for a pretzel dog.

The next thing I did was scoot my little butt over to the 6 p.m. sneak preview of Nikita, one of CW’s newest offering for fall. If you think you’ve caught a case of acute Deja Vu because this sounds a little familiar, don’t worry. You didn’t. It’s actually a remake from the cult hit “Le Femme Nikita” from the 1990’s. I loooved that show. That was one of my favorite shows to watch during the late 90’s. That and “Silk Stalkings” when it was still good with Rob Estes and Mitzi Kapture. I digress.

Here’s a little synopsis of this current reincarnation from CW’s site :

When she was a deeply troubled teenager, Nikita was rescued from death row by a secret U.S. agency known only as Division, who faked her execution and told her she was being given a second chance to start a new life and serve her country. What they didn’t tell her was that she was being trained as a spy and assassin. Ultimately, Nikita was betrayed and her dreams shattered by the only people she thought she could trust. Now, after three years in hiding, Nikita is seeking retribution and making it clear to her former bosses that she will stop at nothing to expose and destroy their covert operation. For the time being, however, Division continues to recruit and train other young people, erasing all evidence of their former lives and turning them into cold and efficient killers. One of these new recruits, Alex, is just beginning to understand what lies ahead for her and why the legendary Nikita made the desperate decision to run.

See Through Is Sexy…Or Is It?

Sex sells. I know that, you know that, the whole world knows that. Maggie Q is a gorgeous girl worthy of filling the legendary sexy stilettoes of Nikita. She can strut the walk and break you in pieces 5 ways from Sunday while making you wish for more. What’s awesome is that HER punches and kicks look awesomely real, not fake. Someone’s been practicing but I’ll get to that in just a second.

Maggie Q is sexy. She’s hotter than those chili peppers that can raise blisters in your mouth and throat if you eat them. There’s no question about that but I just wish she wasn’t quite so skinny. Some more curves would be nice. Other than that, I think she’s a fine choice to play one of my favorite characters from the 90’s. 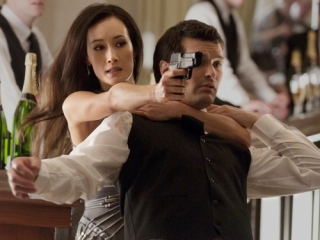 What isn’t quite so sexy is how easy it is to figure out the entire pilot episode. I keep telling myself this is just the pilot and there’s plenty of more chances for the writers to stump and confound me with plot twists and turns. I sure hope so because if this pilot is any indication to what I can expect, I’m gonna be watching a show comprised primarily of Maggie Q looking hot. As much as I like her, I’d get bored.

I’m not sure how high I’m going to keep my hopes since this *IS* a remake, after all. Then again, a girl can hope, can’t she?

Actually, come to think of it, casting Maggie Q really should’ve been a no-brainer as she’s already played this character before. “What”, you ask. “What are you talking about?”

I’m talkin’ ’bout “Naked Weapon”. No, that is not a pr0n movie. It’s the title of a Hong Kong movie that came out in 2002 starring Maggie Q, Anya Wu and Daniel Wu. The only reason I know of this movie’s existence is because I was obsessed with Daniel Wu. O-B-S-E-S-S-E-D.

Anyway, Maggie’s character in the movie is also very Nikita-ish with some differences. Examples are :

1. In “Naked Weapon”, her name was Charlene.
2. It’s set in Hong Kong.
3. The institution was a for-profit organization in “Naked Weapon”. In “Nikita”, it’s some shady arm of the US government. I say “shady” because it apparently went to the dark side and grew too big for its britches. I’d say more but it’ll give away more of the show than I care to reveal at this time.

However, they’re similar enough where I can see why she was picked for this role. Hello, she’s already played a variation of it so slipping into Nikita’s skin should be as familiar as slipping into a favorite lace trimmed night gown but in a slightly different color.

Well…the only bit of randomness I can think of is the name “Daniel”.

You see, Daniel is the man this reincarnation of Nikita fell in love with (which, by the way, was a HUGE no-no).

Daniel Wu, Maggie’s costar in “Naked Weapon”, also happened to be her ex-boyfriend.

Ta da!!! I have deciphered a huge puzzle I’m sure you all were wondering about. You can all rest easy now.

Series premiere for “Nikita” is Thursday, September 9th at 9/8c.