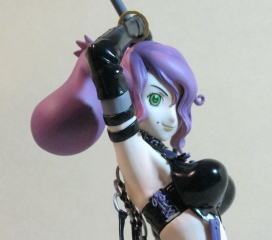 Yamato Toys When I was a kid, we used to keep kosher and that meant that menu items were pretty limited when we went out to eat. If we went to McDonalds, I could have the Fish Filet. At Friendly’s it was either the Fishamajig or the grilled cheese with a clown head sundae. When we went for Chinese, it was lots of veggies, tofu, and sometimes a whole fish that would stare at you while you ate it. When we got Italian, my choice was pretty much always the same, Eggplant Parmesan.

Way back then, when I was chomping down on my eggplant, I could never have conceived of this new release from Yamato Toys. Eggplant-sama is a character from from manga-ka okama’s slightly naughty illustrated book Food Girls. One can only hope that that means we’ll soon be treated with other produced based vixens here at the Wookie.

Let’s the get the basics out of the way. the PVC statue is part of Yamato’s Story! Image! Figure! EX PVC statue collection. It was sculpted by famed sculptor Shuji Hagii. it is 1/6th scale and stands at 10 1/4″ inches tall. Along with the bull whip and the crop, Eggplant-sama also has a removable top and bottom, but we’ll get to that in a bit.

First, let’s talk about clothes on… This is a really clever little statue. when I was looking it over, I almost felt like I was checking out a dirty version of one of the old “Highlights” picture searches. Every time I looked at it, I found another eggplant. Her hair is done up in the shape of an eggplant, Her tassels are little eggplants, even top of her outfit is made from a pair of eggplants.

Ya, it’s a little goofy, it makes the figure a lot more fun than the typical Japanese figure with clothing that magically falls off.

Her face is really well done. She looks a little young, like most Japanese figures do, but she doesn’t look so young that you feel you might get busted by the cops for owning one. As with most anime style sculpts, there’s not tons of detail on the body. they keep it pretty clean and focus on lines and curves. They did a good job here, and adding the little shading accents also help a lot make the piece stand out.

The outfit is pretty cool too. There’s a lot of detail going on. that’s pretty impressive considering how little outfit there actually is. The boots and the use of belts to make the majority of the outfit give it a little bit naughtier look, but its not over the top. I mean… it’s not like she has a zippered face mask… That review will be coming next week.

As you can probably tell by now, that fancy outfit she’s wearing doesn’t necessarily have to stay on her body. Personally, I think she looks better with clothes on. With a little finagling, the outfit comes off and the figure takes on a whole new look… a naked look. OK, not totally naked, she kept her boots and panties on. As to the rest of the body sculpt, all I can really say is that those eggplants don’t look real to me.

A statue like this is definitely not for everyone, and definitely not for kids. Anime lovers will get a kick out of this and people who collect nudes will definitely appreciate the uniqueness that the statue has to offer. Its just hitting shelves now and there’s a good chance that it’ll sell out, so grab it while you can.