All in all, “The Wolfman” wasn’t a horrible movie. But sheer random shock factor is what made this movie scary, if it was even suppose to be scary to begin with. 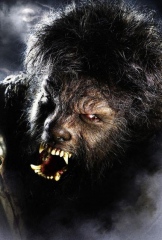 I’ve been staring at my keyboard for the past five minutes and I didn’t write a single thing. This is because I’m operating on the whole “If you don’t have anything nice to say, don’t say anything at all” mantra. I try to follow this nugget of Let’s-Get-Along-ism the best I can but sometimes you just have to be brutally honest.

So let’s get down to business.

I watched “The Wolfman” this past weekend with the boyfriend. We both wanted to watch it but he knows me well enough to know that I can’t handle scary movies very well. Actually, to be more precise, I can’t handle them. At all. That’s right. I’m the kind of person who will hide behind my fingers and/or bury my face in your arm while I make you give me a play-by-play of what’s going on in the scarier parts.

Basically, I’m the kind of girl you want to take to see a scary movie on the first date so that you’ll have a reason for me to latch my claws onto your freshly worked out arm muscles.

Before I get into what I think, here’s the bare bones summary of the movie courtesy of IMDb :

Lawrence Talbot, a haunted nobleman, is lured back to his family estate after his brother vanishes. Reunited with his estranged father, Talbot sets out to find his brother… and discovers a horrifying destiny for himself. Talbot’s childhood ended the night his mother died. After he left the sleepy Victorian hamlet of Blackmoor, he spent decades recovering and trying to forget. But when his brother’s fiancée, Gwen Conliffe, tracks him down to help find her missing love, Talbot returns home to join the search. He learns that something with brute strength and insatiable bloodlust has been killing the villagers, and that a suspicious Scotland Yard inspector named Aberline has come to investigate.

He was hinting that we should pick a better movie because he had a feeling this would be too scary for me to handle. I was like “Nuh uh!!! Wolfman, wheeee!!! FULL STEAM AHEAD!!”

Honestly. What could be so scary about a dude who turns into a wolf every full moon? That’s like Michael Jackson in “Thriller”. I had no idea I would be so wrong.

Keep It In The Family 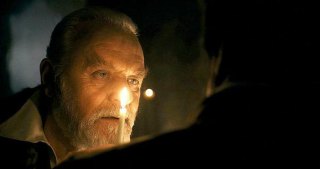 This movie sort of brings that phrase to a whole nutha level. Whatever happened to “Thou Shall Not Covet Thy Neighbor’s Wife” or something? I understand the whole concept of needing romantic tension and the notion of Beauty saving the Beast and whatever, but really? Seriously? In all fairness, I can see why the story had no other choice but to make the prodigal older son fall in love with his dead little brother’s fiance for it to work but still. This was one of the more obvious turns in the storyline I could think of.

What I wasn’t exactly expecting was who the Wolfman was and how far he was willing to go in order to keep the family legacy alive. I’ll try not to spoil the entire movie but it’s kind of hard not to since everything is tied together so intricately. That’s part of what made this movie work….aside from freaking me out when I least expected it. Argh. Ugh…

Sir Anthony Hopkins is a killer actor. He played his part of the estranged father exceptionally well. Actually, I think roles such as these fit him like a second skin. There were so many moments when I thought he was channeling the deliciously diabolical Hannibal Lecter into this character because both of them had that same slick, oily, chummy villain-ish feel. I half expected him to say “Clarice….I am the Wolfman….” at any given moment.

Benicio Del Toro didn’t remind me of anyone in particular playing this part but I think he was an excellent choice. He’s oozed just the right mix of hero and slimy weirdo to pull off being the Wolfman.

Is it just me or does every part Hugo Weaving is given post “Matrix” reminds you of Agent Smith? Inspector Abberline talks like Agent Smith and hunts down his target with the same determination. Don’t get me wrong. I think Hugo Weaving does a great job playing the part of the supremely creepy inspector but I couldn’t stop myself from sticking on a pair of those super secret agent sunglasses Agent Smith wears on to Inspector Abberline’s face. I was also sort of hoping for some Matrix action during the burning house scene when he’s faced with not one but two werewolves duking it out. Alas, this was not to be.

But you know what also cued the “Things That Make You Go Hmmm” song in my head? Agent Smith found a way to duplicate himself in the Matrix. Inspector Abberline can also raise the walking stick he jacked from the defeated Sir Anthony Hopkins over his head like He Man and scream “I HAVE THE POWER!!!” because he’s now also infected and free to spread wolfy germy goodness to unsuspecting people every full moon. That’s fantastic. 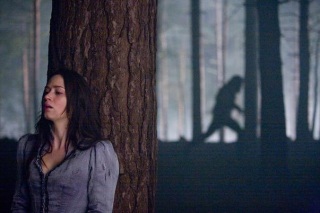 Scared For All The Wrong Reasons

Btw, whoever designed the set is awesome. It lent just the right amount of damp creepiness but it didn’t go over the top. Every shot of the moon was freaking unreal and made me sort of want to howl whenever I saw it too. Just kidding. Sort of. It really set the stage for the story and was really well done.

What WASN’T well done at all was the design of the Wolfman! What the hell was up with the way they looked?! You know what was the only good part about watching them transform? The actual process of the mighty morphing. Seeing the bones break and stretch, the obscene amount of body fur pop up at record pace and the insane rate of gnashing teeth growing in while contorting the face into something completely Other….that part was fantastically awesome. I actually managed to forget to cover my innocent eyes during the all the transforming sequences because I didn’t want to miss a single moment! I was that interested in seeing the actual product.

I will say I did cover my eyes when the Wolfman finally finished transmorgifying but not because he was so demonically scary.

It was because he was so ridiculously NOT frightening.

You know what he reminded me of? The Wolfman, as designed and conceived by the person responsible for character design, reminded me of what would happen of Chewbacca and Michael J. Fox’s “Teen Wolf” were allowed to mate and have cubs.

Not. Scary. At all. Michael Jackson in “Thriller” was scarier. The Lycans of Underworld fame were more wolfmanly than whatever the hell the Wolfman was supposed to be. I was very disappointed. I kept hoping every morphing would result in a more terrifying monster but alas, it was not meant to be. They just looked Chewbacca in dire need of some dental work and a mani-pedi.

You know what WAS scary? That crazy, creepy Gollum-like creature that shows up during the weird dream sequence after Benicio Del Toro is bitten. Omg, that scared the crap out of me.

If they had designed the Wolfman half as well as Ghoulish Gollum Critter, I think the movie would’ve been really well done. They would’ve managed to terrorize me properly without having to resort to lame shock antics like making something jump out at me when I least expect it. 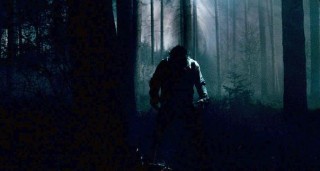 Parting Is Such Sweet Sorrow…Or Is It?

I’m smelling a sequel. Agent Smith….I mean, Inspector Abberline was bitten. He was seen clutching the walking stick of the former patriarch of the Wolfman clan. Why was he carrying it anyway? Last time I checked, he wasn’t bitten or shot in the legs and that thing is WALKING STICK. I’m guessing they really wanted to show that he inherited the curse.

Another part where I thought the symbolism was laid on a bit thick was the difference between father and son as a werewolf. Every full moon saw Anthony Hopkins running around as naked as a furry jaybird could be when he was out wreaking havoc. That’s because he fully embraced the life of the changed.

Benicio Del Toro, on the other hand, is always clothed when he was changed. He made those scraps of cloth hang on for dear life as he sliced and diced his way around town. Aaaw….he was trying to hold on to his humanity even when he was a monster. No wonder his dead brother’s wife fell for him. How sweet.

All in all, I don’t think it was a horrible movie. The story was pretty well written despite some of the more obvious turns. The acting was excellent. The set design was gorgeous. Character design was a fail with the exception of Ghoulish Gollum Critter. * shudder *

This is a movie I’d wait for DVD release….or, if you know your date’s gonna react like me, I’d take her to see this. Sheer random shock factor is what made this movie scary which means you’re gonna have to dig her claws out of your arm by the time this movie’s over. Well…that’s why my boyfriend had to do. Poor guy. I’m just happy I didn’t scream like the other chicks did in the theater. I’m so awesome.