20 Fictional Characters Whose Names You Don’t Know Until Now

They’re famous and you probably know them all by heart. They’re pop culture icons that you grew up with but might not have known their full names… until now. 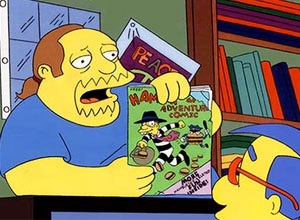 They’re famous and you probably know them all by heart. They’re pop culture icons that you grew up with but might not have known their full names… until now.

1. Did you know the Comic Book Guy on The Simpsons has a name? It’s Jeff Albertson. But that wasn’t the decision of creator Matt Groening. “I was out of the room when [the writers] named him,” he told MTV in 2007. “In my mind, ‘Louis Lane’ was his name, and he was obsessed and tormented by Lois Lane.”

4. Snuffleupagus has a first name—Aloysius.

6. The Wizard of Oz rolls off the tongue a lot easier than his full name, Oscar Zoroaster Phadrig Isaac Norman Henkel Emmannuel Ambroise Diggs. From Frank Baum’s Dorothy And the Wizard in Oz:

“It was a dreadfully long name to weigh down a poor innocent child, and one of the hardest lessons I ever learned was to remember my own name. When I grew up I just called myself O.Z., because the other initials were P-I-N-H-E-A-D; and that spelled ‘pinhead,’ which was a reflection on my intelligence.”

7. Mr. Clean has a seldom-used first name—”Veritably.” The name came from a “Give Mr. Clean a First Name” promotion in 1962.

8. In a deleted scene in the 2006 Curious George movie, The Man With the Yellow Hat’s name was revealed as Ted Shackleford. (Since the scene was deleted, perhaps this doesn’t count.)

10. The policeman in Monopoly has a name, too. You can thank Officer Edgar Mallory the next time he sends you to jail.

11. On Night Court, Nostradamus Shannon was better known as Bull.

13. Sesame Street’s resident game show host Guy Smiley was using a pseudonym all these years. He was born Bernie Liederkrantz.

14. The Michelin Man’s name is Bibendum.

15. On Gilligan’s Island, Jonas Grumby was simply called The Skipper.

16. Staying on Gilligan’s Island, The Professor was Roy Hinkley.

17. The unkempt Shaggy of Scooby-Doo fame has a rather proper real name—Norville Rogers.

18. The Pillsbury Doughboy’s name is Poppin’ Fresh. He has a wife, Poppie Fresh, and two kids, Popper and Bun Bun.

19. The patient in the classic game Operation is Cavity Sam.

20. The true identity of The Lone Ranger was John Reid.