Excuse me sir, is that an eel in your penis or are you just happy to see me?

In news that makes me involuntarily wince and cross my legs, a six inch eel has been removed from a man’s bladder after it sought refuge from the elements… inside his penis.

We might call him the unluckiest man in China, but to his friends, he’s just Zhang Nan. He was bathing with some live eels to cleanse his skin… Silly, I’ve been using soap all these years. I feel like such a fool! His thought was that bathing with the eels would make him look 10 years younger. Our guess is that when one of them made a b-line for his p-line, it probably just shaved a decade off his life instead.

‘I climbed into the bath and I could feel the eels nibbling my body. But then suddenly I felt a severe pain and realized a small eel had gone into the end of my penis,’ the 56-year-old from Honghu, Hubei province said.

‘I tried to hold it and take it out, but the eel was too slippery to be held and it disappeared up my penis.’

For his vanity, Zhang was rewarded with three hours of surgery to remove the slippery little guy from his bladder. Sadly, the eel died before doctors could reach it.

This isn’t the first time something like this has happened. In fact, the old fish in the penis story is one of the most famous urban legends of all time.

Oh, and this photo? Ya, that’s the actual one that they retrieved from Mr. Nan. Eel rolls anyone? 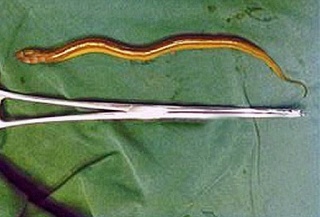