Watch Alison Brie Imitate Everyone From Grumpy Cat to Hadouken

Alison Brie has become a world wide star working on two popular shows at the same time. Each week she can be seen on NBC’s Community and AMC’s Mad Men.

Now Alison is sitting down with comedian, Paul F. Thompkins to get her to try and recreate some of the most famous internet memes, including: Grumpy Cat, Overly Attached Girlfriend, Ermahgerd, Unflattering Beyonce, and Hadouken.

Everything seemed to be going well until she busted her ass during the Hadouken.

One of the things that has also made Brie an internet celeb is the spate of sex gifs that are all around the net. For a bonus video, Brie and Thompkins created a bunch of unsexy gifs. 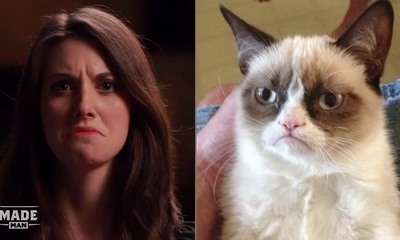