Batman vs. The Penguin (with Patton Oswalt)

Someone really needs to explain death to Batman…

The College Humor Batman skits have been hit or miss, but once in a while, they knock out a really funny one like this.

In the video, Patton Oswalt plays the Penguin. Batman has just rescued Commissioner Gordon and has apprehended the bad guy.

With some heroes, this is when they would deliver justice and finally just kill the villain before they can go off and kill again… and again… and again. Not Batman though, his biggest rule is that he does not kill.

Unfortunately for the bad guys, no one seems to have taught him what dead means. 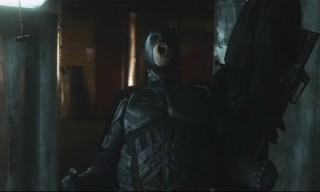