The capsule rose approximately 20 miles through the stratosphere over Granbury and was recovered approximately 3 hours later in a field. 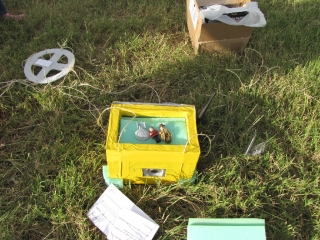 On October 17, 2010 the Brothers Gromm released a small weather balloon from the outskirts of Stephenville, Texas. It carried a lightweight 1 lb 15 ounce foam capsule designed to take photographs from approximately 20 miles above the surface of the earth. The capsule carried a camera, a GPS locator, souvenirs to celebrate the importance of libraries in our communities, and souvenirs to celebrate the actors attending the Star Trek Fan Days convention at the Plano Center in Plano, Texas the weekend of October 23-24.

The capsule rose approximately 20 miles through the stratosphere over Granbury and was recovered approximately 3 hours later in a field in Crowley. The project was a spectacular success, and produced hundreds of striking photos.

To read more about the Gromm mission, hit up their page at www.brothergromm.com.