Taiwan Woman Engaged to Marry Herself

“Age thirty is a prime period for me. My work and experience are in good shape, but I haven’t found a partner, so what can I do?” 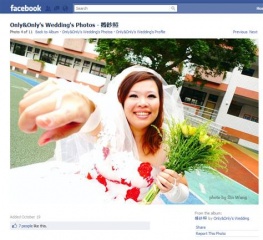 Chen Wei-yih of Taiwan has found the right person to marry — herself.

Uninspired by the men she’s met but facing social pressure to get married, the 30-year-old Taipei office worker will hold the reception in November 2010 in honor of just one person. She’s spending $5,675 on a groom-less wedding that concludes with a honeymoon in Australia.

She has enlisted a wedding planner and rented a banquet hall for a marriage celebration with 30 friends. The money for her wedding comes after online publicity that has netted 1,800 largely sympathetic comments.

“Age thirty is a prime period for me. My work and experience are in good shape, but I haven’t found a partner, so what can I do?” Chen said.

“It’s not that I’m anti-marriage. I just hope that I can express a different idea within the bounds of a tradition,” she added.

Taiwanese women are marrying later and less often as their economic status advances, fueling government concerns about a drop in the birth rate and its impact on productivity.

“I was just hoping that more people would love themselves,” said Chen, who will go on a solo honeymoon to Australia.

According to Chen, her mother had insisted on a groom at first but later jumped aboard the solo marriage plan. But as Chen cannot officially register a marriage to herself, if she finds a man later she will wed again.

“If I had a steady boyfriend, I wouldn’t do this,” Chen said. “It would be offensive to him, anyway.”