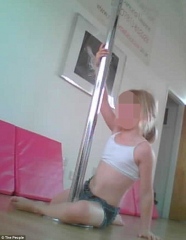 In a new trend, dance studios are offering pole dancing classes for girls as young as three. To the girls, the moves are innocent, but not to Child Protection groups who believe that they are being instructed in the sleazy art of pole dancing.

The pole dancing lessons take place in a room decorated with pink feather boas and sparkling mirrors. They are advertised on a website which also promotes adult lessons, features pictures of lingerie-clad women and describes pole dances as “sexy, relaxing and invigorating.”

The children, aged three to seven, learn moves including holding their legs in a V-shape while sliding down the pole.

One mother, who took her three and five-year-old daughters to the classes, said: “The girls love it. But it is not a wise idea to announce at school that you let your children pole dance.”

“The children will innocently enjoy copying the raunchy moves they learn, but be completely unaware of the sexual messages these send out which inevitably can have dangerous results.

“It is of course very important for children to take exercise and group activities, but why would you package it as pole dancing, something which has overt sexual connotations?

“We need to allow children to be children. The people who started these classes and the parents who take their kids to them need to ask themselves hard questions.”

30 year-old Miss Wilford, who started the classes insist it began because of demands from the children of mothers she teaches to pole dance.

“They wanted to join in because it is such fun. There is nothing sexual about it. I am trying to remove the stigma from pole dancing and show that it actually helps children keep fit and learn balance, much like gym classes. Nothing has meaning apart from the meaning someone attaches to it.”

According to Wilford, pole dancing originated from a traditional Indian sport called Malkhamb in which gymnasts, including many children, performed around a wooden pole.