Just a few minutes ago, Hot Toys announced that they will be creating figures for Marvel’s ‘Captain America: The First Avenger.” Check out the prototype tease image featuring Chris Evans as The Captain

Hot Toys either has really deep pockets or Anthony Wiener style photos of the licensing teams for every major movie studio because there isn’t a major movie out there that they haven’t been able to pull a figure license for lately.

Just a few minutes ago, we got an email from the folks over at Hot Toys that their streak is continuing. Earlier in the week they had announced that they would be making a Ryan Reynolds Green Lantern figure. Now they are announcing that they will be creating figures for Marvel’s ‘Captain America: The First Avenger.” They also included the following prototype tease image below featuring Chris Evans as Captain America. What do you think? 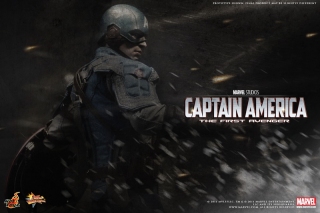