If there were such a thing as a God of Cosplaying it could very well be Miragestudio aka, Clive Lee. 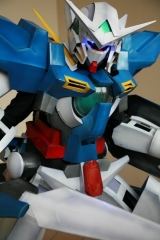 If there were such a thing as a God of Cosplaying it could very well be Miragestudio aka, Clive Lee. We’ve all seen some pretty ridiculous costumes and some pretty ridiculously stupid ones, but Lee’s Gundam 00 – Exia has permanently raised the bar for all mecha cosplayers. Lee started making mecha costumes back in 2001 and has cosplayed as other characters such as Samanosake from Onimusha, Sesshomaru from Inuyasha and even Hades from Saint Seiya.

I won’t pretend to be an expert in mecha cosplaying or cosplaying in general, but I would imagine that cosplaying as a mecha is one of the more tougher costumes to pull off because of all the boxy bits and how difficult it might be to get every part in proper proportion.

According to textfiend.net, these images were taken at Cosfest VII and the costume took Lee a year to make while holding down a full-time job. One of the special features for his suit is the light-up GN drive (which is very similar to Iron Man’s core) and eyes.

To put on his Gundam 00 – Exia suit, Lee needed at least two assistants. Many of the parts which are made with cardboard are fastened together using velcro strips.