You’ll have to wait till after the jump to find out what those two words are… but here’s a hint. One of them starts with an F and the video clip is NSFW for language.

The Dalai Lama is known the world over for his messages of peace and love… and for being the only one left on the planet who doesn’t make fun of Richard Gere for that old gerbil thing. One thing that most people don’t know about him is that he’s not afraid to tell it like it is.

While most videos of him are filled with flowery language that floats over the head of the common man, this little gem from four years ago has him dropping all pretense and really letting the interviewer know what he thinks of the differences in religions and cultures around the world. 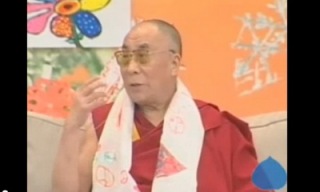