For some reason, I find this a lot easier to take than the dance section of the Star Wars Kinect game.

Every spring Walt Disney World In Orlando has a very special event called Star Wars Weekends. For several weekends in May and June, the park celebrates all things Star Wars. There are actors from the films on hand, Disney characters dressed in Star Wars Costumes and tons of special events like Hyperspace Hoopla. This Star Wars Variety show seems to get bigger and more ridiculous every year. This year, we’ve got The Emperor singing ‘I’m Gonna Knock You You’ while a Gramorrean Guard DJ’s, Vader and his storm troopers (with Boba Fett) performing “Smooth Criminal”, Chewbacca performing “Sexy And I Know It”, the whole cast performing LMFAO’s “Party Rock!” and a whole lot more. We’ve got some of the highlights for you posted below, but the top video is the whole half hour dance extravaganza. 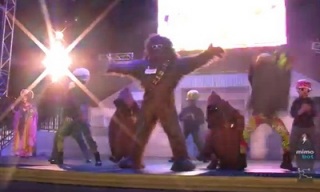