Ever wondered what Nick Cannon would look like when he was rupturing some poor dude’s nuts? Look no further.

The America’s Got Talent auditions continued last night and there were definitely some acts that people will be talking about this morning. The three big ones were The Olate Dogs, a Rapping Grandpa named Duncan Crane and some dude named Horse who had the talent of getting hit in the nuts. Seriously… even Nick Cannon Kicked him in the junk three times. I think my voice jumped an octave just watching it.

For me, the Olate Dogs were the best part. These are some of the most talented dogs I’ve ever seen. Also, they presented the audience with the most complicated but sniffing routine that has ever been captured on film. 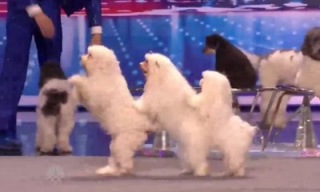