Donald Trump is The Most Popular Candidate on Etsy. Period!

In just a couple of hours, we’ll know if Donald Trump was able to triumph in the Iowa Caucus. If he does, we can look forward to “so much winning that we’ll actually get tired of winning”, Trump’s brand on everything from steaks to condoms, and a white house that will most assuredly be be covered in so much gold leaf that the cast of Bravo’s Shahs of Sunset cry out at its sheer tackiness.

That’s not to say that there won’t be some interesting products coming our way. In fact, a few enterprising Etsy salespeople have already gotten ahead of the curve with some very unique products, seemingly inspired by something that Trump had previously said about his arch nemesis, Megan Kelly.

That’s right. For those days when you’ve got blood coming out of your… wherever, you can now keep everything in check with Donald Trump’s face.

CaleighsCloth is now selling bespoke, psychedelic, Donald Trump menstrual pads featuring his face. Why you’d want his face that close to your body is beyond me. 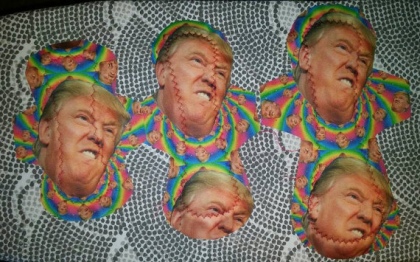 However, if the fun jokey tone of Trump period pads (with wings) isn’t quite over the top and crazy for you, there’s always Stephanie Ulrich’s portrait of the Donald, made from: “Menstrual blood, spit, acrylic, watercolor paper, professionally matted, framed in oak, Rebellion.” That will only set you back $1,000. I would recommend you steer clear of this one if you have a particularly nosy dog or cat. 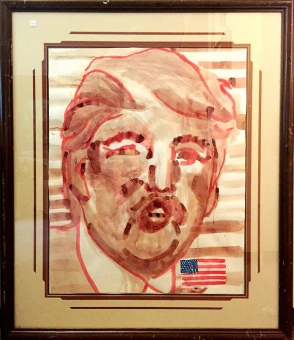 You can find all the above mentioned items on Etsy HERE