The potential of such a machine would revolutionize how we obtain water and “become the first mainstream household appliance to have been invented since the microwave.” 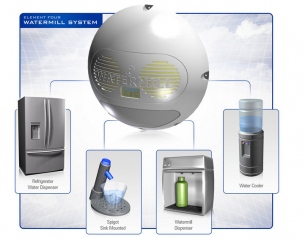 Element Four, a firm of eco-inventors from Canada claims to have found the solution to the global water shortages by harvesting water out of thin air.

The company has invented a machine called the Water Mill, which uses electricity to condense moisture from the air and purify it into drinkable clean water. The potential of such a machine would revolutionize how we obtain water and “become the first mainstream household appliance to have been invented since the microwave.”

According to reports, the machine was on display this weekend in the Flatiron district of Manhattan, “It works by drawing air through filters to remove dust and particles, then cooling it to just below the temperature at which dew forms. The condensed water is passed through a self-sterilising chamber that uses microbe-busting UV light to eradicate any possibility of Legionnaires’ disease or other infections. Finally, it is filtered and passed through a pipe to the owner’s fridge or kitchen tap.”

When Water Mill’s inventor, Jonathan Ritchey was asked about the reality of such a crazy machine, he simply replied, “Just wait and see. The demand for water is off the chart. People are looking for freedom from water distribution systems that are shaky and increasingly unreliable.”

As awesome and as 20th century as this machine sounds, there is however a down side. Currently, it is expected to cost at least $1,200 when it goes on sale next spring. Which is not exactly as cost effective as a microwave.