With an epic proposal like this, it is a damned good thing she said yes.

We’ve seen everything from video games to rube goldberg machines when it comes to geeky ways to ask someone to marry you. I think this might be one of the first LEGO films that we’ve ever seen for that purpose, however. It was created by Atlanta-based filmmaker Walt Thompson. He made the stop motion film to commemorate the history of his relationship with his girlfriend and then to propose to her. While most of action in the film are things that happened in their lives, I don’t know if there were actually storm troopers or Han Solo in Carbonite at the actual proposal. Just in case you were wondering, it looks like she did actually say yes. 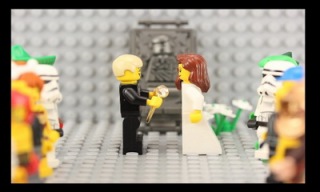