We Wish You A LEGO Christmas

The only thing that had held back the family from making the church before was that Lego didn’t make the right color bricks until now. 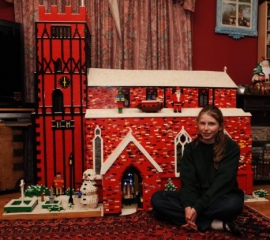 The Daily Mail in The UK had a great story about a family who really loves their legos. In fact, their latest model is a 250,000 Lego piece Christmas Church that is worth almost $20,000.

They are the Addis Family and they spent seven weeks on the 200 lbs, 7ft-high and 5ft-wide church replica in their living room. Husband and Wife, Mike and Catherine have both been Lego lovers since they were kids and had no problem giving 170 hours each to their project.

The Church model is based on the All Saints Church in Earls Barton, Northamptonshire, a church Mike visited in his childhood.

While this Church is huge, it is by no means the family’s first attempt at Lego greatness. They’ve actually built a different giant model every year for the last 16 years. Now, their kids Holly, Thomas, and Christopher have joined the construction crew.

‘It’s a real labor of love but a complete addiction. We simply couldn’t imagine not doing it. Christmas would not be Christmas. The sense of satisfaction is immense but I have to admit that there are times when I wonder if it’s not a little mad to spend so much time on it.’

The Addis family have previously built giant Lego models of Father Christmas, a snowman, an angel, the Three Kings, a sleigh, a model of Santa coming down the chimney and their own house.

The only thing that had held back the family from making the church before was that Lego didn’t make the right color bricks until now.

‘It’s not a dead ringer but it’s a good likeness. We’re very proud.’ The Addis family have spent years building up their mammoth collection of Lego which now features nearly 500,000 bricks.