Not only is this a decent parody video, but they actually went and re-visited the set locations from E.T., so it makes for a great trip down memory lane.

I’m honestly not a fan of the Maroon 5 song, Pay Phone, but if there is going to be a parody of something, I’d rather watch one of it than another one of that crap song about the lady who maybe wants you to call her, but probably says that to every guy and will just end up standing you up on the first date.

Angie and Chad decided to take a road trip to various E.T. filming locations to celebrate the movie’s
30th Anniversary. We grew up watching E.T. and it was kind of a dream come true to see these locations! The guy who lives in the house now came home while we were dancing around in front of the house, but he was super nice! 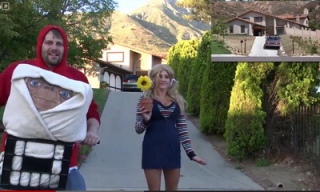