Fat Bob was believed to have been the heaviest dog in Scotland and had piled on the pounds due to a diet of fish suppers and four tins of dog food a day. 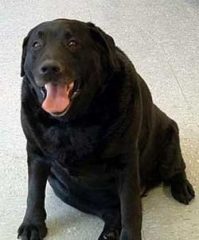 While this seems like a rather funny story, it’s actually quite sad.

Fat Bob is a dog that was so fat he could not scratch his own ears. But since being confiscated from his previous owner, Fat Bob has shed a third of his body weight enabling him to scratch with full delight.

Owner, Ralph Dryden from Motherwell, was convicted of causing unnecessary suffering by over-feeding him. Fat Bob was believed to have been the heaviest dog in Scotland weighting in at 64kg and had piled on the pounds due to a diet of fish suppers and four tins of dog food a day. He was removed from his previous owner in January after a vet examined him and found him to be “dangerously obese.”

At a hearing at Hamilton Sheriff Court, Dryden was convicted of causing the animal unnecessary suffering. Sentence was deferred for six months for good behaviour.

Since being re-homed in March, “Fat” Bob has slimmed down to a lean 41kg thanks to a strict diet and six-mile walks. New owner Paul McShane said: “Bob had to be lifted into the car when we first got him, he couldn’t even walk the distance from the car to the front door of the house.

“He also couldn’t climb onto a bed or be trusted on the stairs. I was told on some occasions Bob was getting fed four big tins of dog food as well as a fish supper a day.”