There are a lots of stories about the debris from last year’s Tsunami in Japan is starting to wash up along coast of the USA. This is first story we’ve seen about something that survived the trip.

There have been a lot of news stories lately about how the debris from last year’s Tsunami in Japan is starting to wash up along the northwestern coast of the USA. This is first story we’ve seen about something that survived the trip.

According to scientists, this little striped beakfish got trapped in the bait box of a small Japanese fishing boat during the Tsunami when an earthquake hit Fukushima in 2011. In March, the boat washed up along the shore of Washington State and the fish was found, still alive, in the bait box.

That means that the fish was able to survive a trip of more than two years and 5,000 miles on just whatever organisms were growing in the bait box where it was stuck.

Now, the fish is living large as a star attraction in Oregon’s Seaside Aquarium.

On a slightly bleaker note, it turns out that there were four other fish who also survived the journey with this one… but scientists took them to Oregon State University for dissection and to have their age and exact species confirmed. 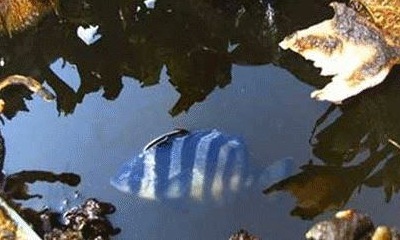