The Hunger Games: Catching Fire is set to come out on November 22nd, 2013, but the marketing machine is in full swing. This weekend, we’ll get to see a trailer or at least some footage for the movie during the MTV movie awards. Until then, we’ve got this great new photo of Katniss Everdeen (Jennifer Lawrence) and her little sister that was released today on the film’s Facebook page. 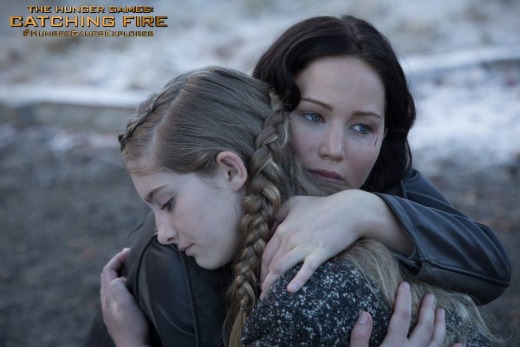 Official Synopsis:
‘The Hunger Games: Catching Fire’ begins as Katniss Everdeen has returned home safe after winning the 74th Annual Hunger Games along with fellow tribute Peeta Mellark. Winning means that they must turn around and leave their family and close friends, embarking on a ‘Victor’s Tour’ of the districts. Along the way Katniss senses that a rebellion is simmering, but the Capitol is still very much in control as President Snow prepares the 75th Annual Hunger Games (The Quarter Quell) – a competition that could change Panem forever.