You’ve got to love how the woman sits there, posing with the ball while a small child cries hysterically just a few feet away.

For a lot of kids, one of their happiest childhood memories is going to a big league baseball game. All I remember about my first game was that the guy behind me had “a really funny smelling cigar”… but anyways, one kid went home from a game the other night with some of the worst and best baseball memories that he’ll ever have.

The young baseball fan was ecstatic when he had the chance to catch a foul ball tossed into the stands by the Rangers’ Mitch Moreland. Sadly, he missed it. Even sadder, the guy next to him didn’t. Normal baseball etiquette is generally that if you are an adult and you catch a ball right next to a little kid… you don’t have to, but it is super awesome of you to give the ball to the kid and make his whole freaking year with the simple gesture… Well, that did not happen.

Instead, he gave it to the chippy sitting next to him. Was it his girlfriend or maybe his daughter? We’ll never know. What we do know is that he gave it to her and she took it proudly, waving it in the air and posing for a photo as if she’d caught it herself while the boy was left weeping at his own failure just three feet away.

The ensuing backlash over the internet has caused them to write the following statement:
“My fiancé Shannon and I were honestly unaware of the situation of the little boy sitting next to us last night since we were so caught up in the excited and moment of being at our first Ranger’s baseball game together. “I love children, I would never hurt someone,” his fiancé Shannon Moore said. “It’s very hurtful, especially when you know you wouldn’t intentionally hurt somebody or hurt their feelings. Especially when it’s a little-bitty toddler.”

Of course, they also went on to suggest that the announcer owes them an apology for mocking them as the events unfolded…

“He took an event and sensationalized it, threw it out there, never checked or validated the facts,”

The story does have a happy ending though. Someone in the dugout saw the kid crying and tossed him a ball. 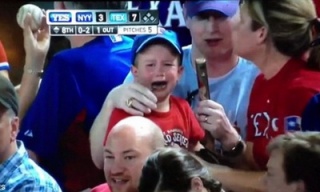