All the auto tune in the world couldn’t cure these girls’ tone deafness!

I watched this video all the way through. Somehow I was able to make it to the end without jamming a scissors in my ear. All the auto tune in the world couldn’t cure these girls’ tone deafness! It was only a matter of time until someone came along and knocked Rebecca Black off her crappy internet song throne. Who knew that it would take two vapid little trolls to do it?

The band is called Double Take… and no, I don’t think they got the name because people did a double take when they heard how crappy they were. The premise of “Hot Problems” is pretty simple (like the singers). They are lamenting the woes of being hot. Lucky for them, they probably won’t have to worry about it for that much longer as looks fade faster than their spray tans. 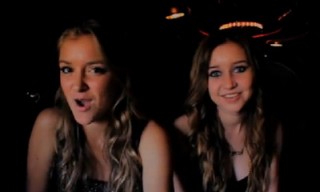