All I can picture is some starfish version of Sarah Connor.

All I can picture is some starfish version of Sarah Connor, but apparently, there’s a new robot that’s been tasked with ridding the coral reefs of a particular type of starfish that is doing it great damage.

We are currently in the midst of what scientists are calling, the 6th Mass Extinction where some species are doing too well because of imbalances in the ecosystems. The problem with this in Australia is the crown-of-thorns starfish, which has moved into new habitats and completely taken over. This is killing off the native species because the starfish is eating all the food. 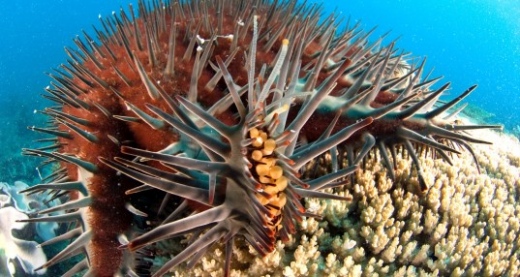 Enter the Cotsbot. Developed by Queensland University of Technology researcher Matthew Dunbabin, the submersible drone has a camera that can hunt down those neredowell starfish and dispatch them.

“The core of the detection is a state-of-the-art computer vision and machine learning system. The method of killing involves the administration of a lethal injection to the starfish. After the local population of starfish is wiped out, divers then move into the area and dispose of the corpses.”

I wonder what PETA has to say about this…