A man claiming to be a vampire is in the Galveston County jail after attacking a woman over the weekend. 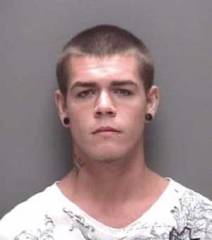 A man claiming to be a vampire is in the Galveston County jail after attacking a woman over the weekend. “He was begging us to restrain him because he didn’t want to kill us,” Galveston Officer Daniel Erickson said. “He said he needed to feed.”

Lyle Monroe Bensley, 19, is being held on a charge of burglary with intent to commit assault after forcing his way early on Saturday into the apartment of a woman he did not know, police spokesman Capt. Jeff Heyse said.

Bensley, covered with tattoos and wearing only boxer shorts, forced his way into the apartment on Seawall Boulevard and made his way into the bedroom of a woman whose name has not been released.

Bensley then made growling and hissing noises while biting and hitting the woman in her bed. The woman was able to break free after Bensley dragged her out of the apartment.

She ran into the parking lot where she got into a car driven by a neighbour. Bensley beat on the car before it sped away, Heyse said. Police received a call at 6:50 a.m. Erickson said he and another officer were in the woman’s apartment when they heard shrieking and growling sounds and saw Bensley in the parking lot. They arrested him after a short chase.

“I’m a vampire, and I’ve been alive for over 500 years,” Bensley said, according to Erickson. Emergency medical personnel determined that Bensley did not appear to be under the influence of drugs, Erickson said. A mental health hold was placed on Bensley and his bond was set at $40,000.

One thought on “Man Arrested After Biting Woman, Thinks He’s a 500 Year-Old Vampire”