Well this is just about the most heart-warming thing that we’ve seen come out of Marvel in a long time.

Maybe it is just because they are now owned by the the happiest place on earth, but Marvel Comics went out of their way this week to help a child in need by creating a special super hero for him to convince him that he should wear his hearing aid.

It all started when Four-year-old Anthony Smith started to refuse to wear his hearing aid. His reason? “Super Heroes don’t wear hearing aids!”

Having tried everything else, his mom turned to Marvel Comics, the source of her son’s favorite heroes. Here’s the email she sent them:

I am the mom of a super hero mad 4 year old. He lives and breathes super
heroes, he also has been diagnosed with a rare genetic disorder
– mosaic trisomy 22. The good news is that his physical challenges are
workable, he is mentally perfect, and while he will be having a heart
surgery this summer – he is on the mend. The challenge that he will face
for his entire life are his hearing impairments. He has no ear, and a
complete hearing loss on his right side and mild loss on his left. He
currently wears 2 hearing aids.

Today as he was getting dressed I was putting on his “Blue Ear,” the aid
he wears on his left ear. He did not want to put it on, he told me super
heroes do not wear blue ears. To get myself out of a bind I told him
that sure they do – in fact Captain America has one under his mask.
After repeated questioning he believed me – but I was wondering
– ay e you have an intern, or someone who would like a challenge – could
you make a little guys day by drawing him a hearing impaired super hero?

Thanks for considering this – I am likely to get stuck in your spam
filter – but you never know – have a great day – I am attaching a
picture of Anthony so you can see one of your dedicated customers.

The first person to respond was Bill Rosemann, an editor at Marvel. He sent her a letter with copy of a 1984 issue of The Avengers featuring Hawkeye. In it, he loses his hearing after getting hit with one of his own arrows and has to wear a hearing aid.

Then, Marvel production artist, Manny Mederos jumped at the challenge and quickly sent this back to the mom: 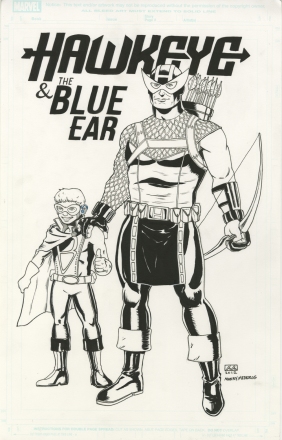 But that wasn’t the end of it. Quickly, the sketch of a small boy evolved into a stand alone hero named Blue Ear, a hero who wears a blue hearing aid (like the boy’s) that helps him hear people crying for help.