When Latkiewicz isn’t busy trying to spread the gospel, he’s busy coming up with new moves to encourage Star Wars nerds everywhere to stretch, tone and generally do some exercise.

Comedian Matthew Latkiewicz is the founder of Star Wars yoga and a self professed six out of ten on the Star Wars Nerd Scale (he claims he’s a six because he doesn’t own his own Storm Trooper Costume). When he isn’t busy trying to spread the gospel of Star Wars Yoga, he’s busy coming up with new moves to help encourage Star Wars nerds and geeks everywhere to stretch, tone and generally do some exercise. God knows they already don’t do enough of any as is. 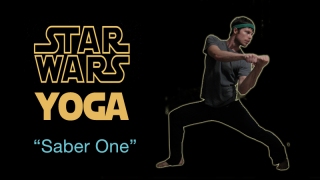