Meme Based Fashion Debuts With The Pedo Bear Plush Hat

It’s like the sorting hat from Harry Potter, but instead of choosing your house, it just decides if you are “Too Old!”

In the world of internet memes, pedobear is king. What is there not to love about the guy? He’s a cute little bear… who happens to have a taste for something he really shouldn’t have a taste for. Regardless of what you might think of him, he’s huge and he’s popping up everywhere. Not only has he invaded nearly every forum on the internet, but you can’t go to a comic convention without having someone in a Pedobear running around and grabbing all the girls.

It’s like the sorting hat from Harry Potter, but instead of choosing your house, it just decides if you are “Too Old!” 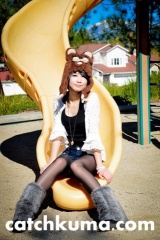 We thought that the these hats were so cool that they warranted more than just a normal WTF Post, so we talked to the folks over at Catch Kuma and they are letting us give away three of the plush Pedobear hats HERE.