Some boob really messed this job up. 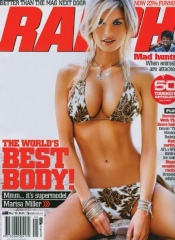 What we have here is either one of the weirdest cases of high-seas piracy or the potential for one of the coolest scuba diving destinations in the world. According to Stuff.co.nz, over 130,000 inflatable breasts have gone missing from a boat somewhere between Beijing and Stdney Australia.

The cargo, which was supposed to be sent out as a promotional gift to subscribers in January was worth around $200,000. This financial loss is compounded by the fact that the magazine’s parent company is already in $4.3 billion in debt.

The magazine put out an alert for the boobs to all shipping authorities in hopes of finding them in time for the next issue’s deadline.

Ralph editor Santi Pintado urged anyone who has any information to contact the magazine.

“Unless Somali pirates have stolen them its difficult to explain where they are,” Pintado said.

“If anyone finds any washed up on a beach, please let us know.”