The kid is learning some vocab. Its not like he’s playing the hot coffee mod on GTA, right? 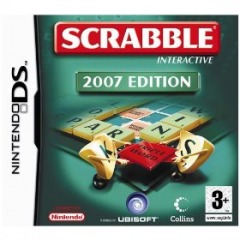 UPI is reporting that a mother in the UK is astounded to find out that her son’s Nintendo Scrabble game is using swear words when he plays against it.

Tonya Carrington says she was mortified when one of the first words the game’s computer came up with against her son Ethan was “tits,” defining it as an “informal word for female breasts,” the British tabloid The Mail on Sunday reported.

But that was only the beginning, as the Scrabble game also elected employ an array of common swear words when tested by Carrington, 36, who is now warning parents to avoid the game.

“I bought it at ASDA in a two-for-$45 deal and the packaging said it was suitable for young children,” she told the newspaper. “Scrabble is a game most families have around the house. I got it for Ethan on his DS (game system) to try to improve his vocabulary. But I’ve banned him from playing it because I don’t want him to learn these sorts of words.”

When asked, Nintendo threw game designer Ubisoft under the bus.

Look. The days of the seven words you can’t say on tv is passed. Swears or no swears, the kid is learning some vocab. Its not like he’s playing the hot coffee mod on GTA, right? If tits is the harshest word your 8 year old kid knows then the world might just be a friendlier place than I think it is.