Millennium Falcon Spotted At The Bottom Of The Baltic Sea!

“A long time ago”… OK, but maybe not in a “Galaxy Far, Far, Away.”
We’ve seen some pretty interesting UFO sightings over the years, but it is pretty rare that we see one that so closely resembles a ship from one of the greatest movie sagas ever created! That’s right, a group of Swedish shipwreck surveyors have spotted an unidentified item at the bottom of the Baltic see that has a very strong resemblance to the one and only Millennium Falcon from Star Wars!

According to their sonar, the object is “massive cylinder with a 200 foot diameter and a tail that’s 650 feet long.” Another massive cylinder was found around 600 feet away… perhaps it is Slave 1!

Some people think it is the Falcon, others think it might be a giant bathtub style drain plug for the entire Baltic sea. We probably won’t know for quite some time however, because no one seems to have the money to get down to the bottom of the sea and check it out.

One thing is for sure, it is definitely NOT at street lamp! 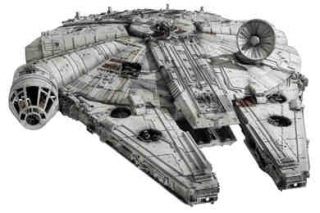