Over the course of a year, 1 CityTree can remove as much as 240 metric tons of C02 from the air.

Trees do an excellent job of cleaning the air of pollution, but it isn’t practical to plant them around major cities. Thankfully, one company has now created “City Tree”, a 4m x 4m plant filled square that is capable of cleaning as much air as 275 trees while costing 95% less in upkeep and taking up 99% less space.

The CityTree is covered with a special bio-engineered moss that eats pollution according to Green City Solutions Co-Founder, Zhengliang Wu: “Moss cultures have a much larger leaf surface area than any other plant. That means we can capture more pollutants.”

Along with ozone gasses, the CityTree also removes dust and nitrogen dioxide. All the power it’s monitoring system needs is supplied by a built-in solar panel, and it is watered by rainwater that collects and filters. Over the course of a year, 1 CityTree can remove as much as 240 metric tons of C02 from the air.

As of right now, there are 20 CityTrees installed around the world in cities like Oslo, Paris, Brussels and Hong Kong. 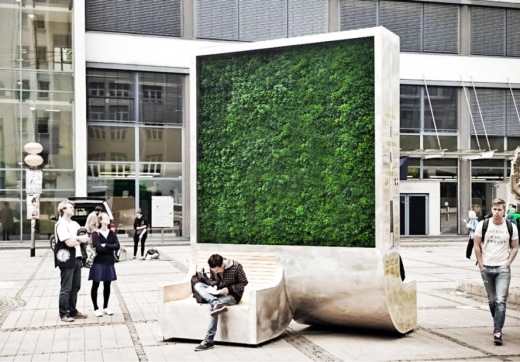