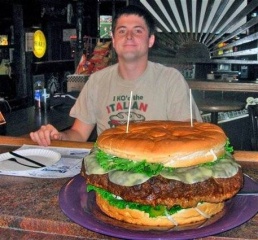 There’s this place near my house called Cheeburger Cheeburger. They’ve got a massive burger there, I think around 4 lbs. If you can eat it than you picture goes on the wall of fame and you go down in burger eating infamy. Well, Cheeburger Cheeburger has nothing on Denny’s Beer Barrel Pub in Clearfield, Pa. Denny’s is home to the 15 pound Beer Barrel Belly Bruiser. That’s right, a 15 pound cheeseburger. When you added on the bun and all the fixin’s the massive creation topped scales at just over 20 pounds.

That may sound like an impossible meal to take on for even the heartiest of eaters, but that was because no one was expecting Brad Sciullo, a 21 year old chef from Uniontown to step up to the challenge. weighing in at 180 lbs, Brad took to the burger like a drowning man to a very meaty life raft.

His only reason for doing it? “I wanted to see if I could.”

The burger included a bun, lettuce, tomatoes, cheese, onions, mild banana peppers and a cup each of mayonnaise, ketchup, mustard and relish.

For all his efforts, Brad was rewarded by the restaurant with $400, three T-shirts, a certificate. Our guess is he was also rewarded with an obstructed bowel… 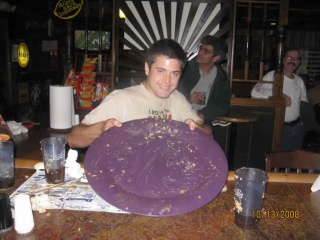