Mary Wasn’t the Only One. Second Virgin Shark Birth Recorded

Her name is Tidbit. Sure, its not as Fancy as Jesus, but they do have something in common. 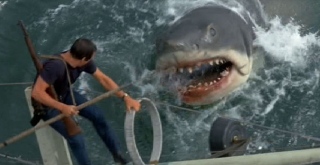 Her name is Tidbit. Sure, its not as Fancy as Jesus, but they do have something in common. they are both the spawn of an immaculate conception. She’s the offspring of a female blacktip shark, but according to scientists at Stony Brook University, she has no DNA from a father.

the eight year old Tidbit, a resident of the Norfolk Canyon Aquarium in Virginia, is not the first of her kind. The same group of scientists confirmed the first-ever virgin birth back in 2007 on a hammerhead shark living in Omaha, Nebraska.

Scientifically known as parthenogenesis, the virgin births have been confirmed using DNA-fingerprinting techniques identical to those used in human paternity testing.

For more information on Tidbit, the Shark Jesus, check out the latest issue of the Journal of Fish Biology. I hear they have an awesome centerfold.