Fans around the world may love “Harry Potter,” but not the man born in 1989 who shares the same name as the famous wizard from Hogswart’s School of Wizardry. 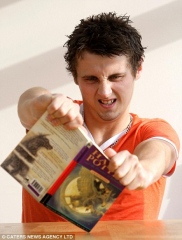 Fans around the world may love “Harry Potter,” but not the man born in 1989 who shares the same name as the famous wizard from Hogswart’s School of Wizardry. Their similarities are striking, even down to the signature scar on their forehead which Potter received after running into a lamp post when he was 15. But for the real-life Harry Potter sharing his name with a fictional character is not quite as magical as it might seem.

According to Potter, life was fairly ordinary prior to JK Rowling’s release of “Harry Potter And The Philosopher’s Stone.” But since then his life has changed and he has endured taunts from the public, police, phone companies and even a football referee.

Potter who is from Portsmouth, in Hampshire, admits that he wishes author Rowling had never used his name for her books.

“My life has changed completely since the books were written,” he said. “At first I thought it might be quite a good thing to have the same name.

“But now it is like someone has cast a bad spell on me, the reactions I get from people range from making fun to plain aggressive.

“Sometimes I wish JK Rowling had never used my name.

“People seem to forget that I was Harry Potter before the character. I was nine when the books first came out.”

Mother Tracey Shaw, 47, never dreamed that the name she picked for her first child would one-day be a global phenomenon.

“People used to assume that he was named after Prince Harry, and that was his nickname when he was very young – we called him Prince Harry,” she said. 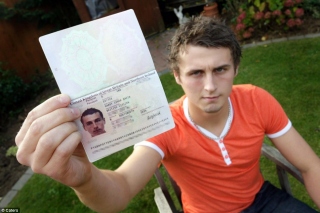 ”There was no such thing as Harry Potter at the time so I didn’t have a clue the name would become so famous.”

Potter even had to show his girlfriend his passport so she would believe him when they first met and a bus company refused to issue him with a pass because they didn’t believe he was telling them the truth when he tried to sign up.

“No one ever believes that I’m telling the truth about my name. I had to show my girlfriend my passport, my bank card, and my driving license to convince her that I wasn’t lying.

“After 12 years of it I couldn’t count the amount of times I’ve heard ‘You’re a wizard Harry.’ It does wear a bit thin after a while.

‘And I’ve heard all the puns about my wand.’

Since its debut, “Harry Potter” has shot British author JK Rowling to stardom. All seven books have spawned blockbuster films and spin-off merchandise. All the mega-money made by the fictional wizard, however, provides little comfort to the real the real Harry Potter.