This guy must have been watching a John Cusack marathon or something because he’s channeling his most inner Lloyd Dobler and Rob Gordon.

One special reader of YBMW must have been watching a John Cusack Marathon or something because he’s channeling the spirits of both Lloyd Dobler from Say Anything and Rob Gordon from High Fidelity by doing his own, geeky version of standing outside his girlfriend’s window with a boombox over his head.

You can’t even really find boom boxes anymore… but the internet is everywhere and that is exactly what this romantic geek used when he thought of putting together a perfect Mixed Tape for the girl in his life.

We wanted to keep his Valentine’s going, so we grabbed a screen capture of his site from earlier today and found as many of the songs from his playlist that we could muster. 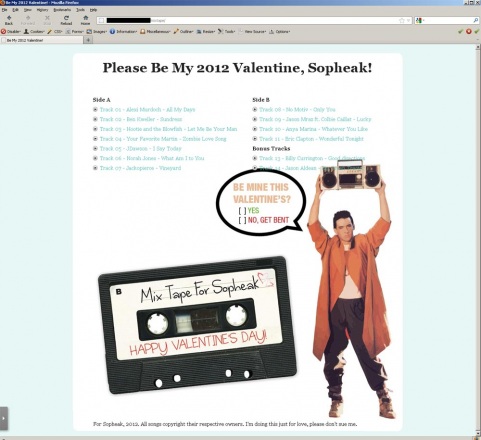