Savita Bhadhi, the racy comic that attracts millions as well as controversy in conservative circles. 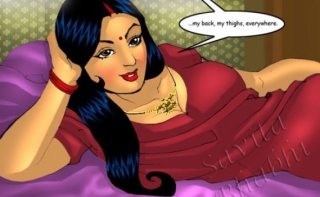 Jessica Rabbit is going to have some new competition with India’s newest fictional star, Savita Bhadhi (or sister-in-law Savita), a buxom, recently married housewife who has risen to international Internet fame.

While pornography is illegal in India, it seems as if some anonymous group of computer geeks have decided to take it upon themselves to create their own fantasies with the cartoon seductress Savita who knows what she wants and how to get it.

The misadventures of Savita receives nearly 60 million unique visitors every month with 70 percent of the traffic coming from India. They are all published on savitabhabhi.com with scripts based on fantasies submitted by fans.

The success of Savita is not necessarily due to its raunch or the character’s Pamela Anderson proportions. Rather is it due to her roots in Indian culture and the cleverness of the comic’s creators who have “tapped into current anxieties about the social changes brought about by modernity as well as nostalgia for past forms of printed entertainment.”

“One of the reasons for creating SB was to also portray that Indian women have sexual desires too,” Deshmukh said. “India is a country which is still sexually repressed and I feel that for it to break the shackles, it is the women of India who are going to have to come out first. We are already seeing that in a way, and hopefully SB will do her bit to help in this revolution.”