Sillof jumped on the scene a few years ago with his steam punk take on Star Wars. Since then, he’s become a bit of an icon in the action figure customizing world. He just posted his newest creation, a D&D inspired take on the heroes of the Justice League. Instead of Superman, you’ve got Sir Periman The Paladin. In place of Batman, there’s Bartimus the Rogue. Standing in for Wonder Woman is Wandu The Amazon Barbarian, The Flash is now Flu Shu The Monk, and the Green Lantern is Halgor the Emerald Wizard. Check them all out below. 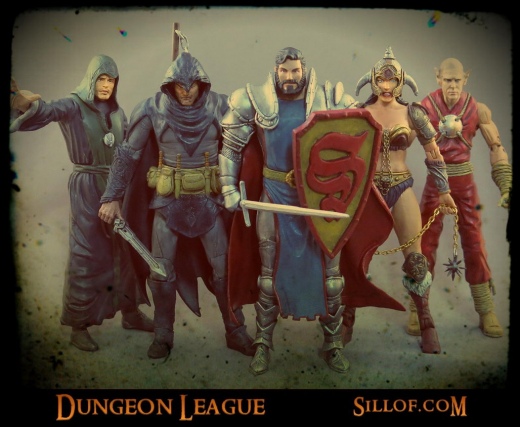 Here’;s what Sillof had to say about the figures:
Anyone who has ever played a role-playing game in their childhood probably at some point imagined what some of their favorite characters from television, film, comics, and literature would look like inside the medieval fantasy world of their chosen RPG, I know I did.

I spent house imagining what race and class each of them would be. Recently I decided to indulge my childhood fantasies and make some of those characters. While this is not a unique endeavor and it has been done by others before in various ways I think they are still unique and I hope you enjoy them.