Skeletons, Insects And Flowers – The Strange Art of Cedric Laquieze

We have always gone out of our way to feature interesting art on Youbentmywookie. The work of Cedric Laquieze is interesting to say the least. The European artist doesn’t bother with the normal artistic media. Instead, he… for lack of a better word… re-purposes the skeletons of animals and the bodies of dead beetles to create his work. Don’t get us wrong, his art is anything but gloomy. The addition of flowers and feathers make his displays some of the most colorful and interesting that we’ve ever seen.

For me, one of the most interesting aspects of his art is how he changes things. For the most part, he actually mixes and matches parts of different animals to give them a more bi-pedal posture. They end up being almost human-like. Well, not really, but closer to a cartoon insect than a real one. It is also really interesting to see how sometimes he takes a normal skeleton and brings it to life with flowers and yet other times, he takes the bones and uses them to create something entirely new, like the throne for a beetle. 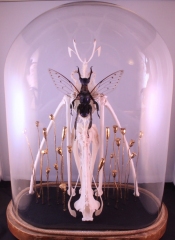 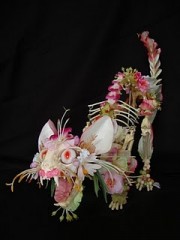